Written by Errol Castens for the Oxford Citizen 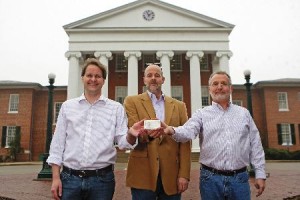 An estimated three million Americans stutter, and three University of Mississippi professors have created a device that might help many of them.

“We call it a stuttering prosthetic,” said Paul Goggans, professor of electrical engineering. “We call it that because we want to emphasize that it’s not a cure: It’s an aid.”

“What it does is pretty straightforward. How it works on the brain is a complicated question that I’m not sure anybody has the answer to,” Goggans said. “Our idea is that stuttering is caused by a failure of the internal feedback in the body. You say something, and the brain doesn’t get the message that you’ve finished, so it says, ‘Do it again. Do it again. Do it again.’

What this (device) does is to give a different path for the feedback to come so the brain gets the message.”

“The stuttering community is unrecognized and underserved,” said Gregory Snyder, associate professor of communication disorders, who is himself a stutterer. “We’re not claiming to have a cure, but it’s more or less a prosthetic that makes events of daily living easier (like eyeglasses).”

When Snyder wears the prototype, his incidence of stuttering is evident almost immediately.

“If you look at these earliest researchers, they had a clearer understanding of what stuttering is than some people in the 20th Century,” Snyder said. “One of the realities is that speech feedback in whatever its format reduces stuttering frequency. This was overlooked for decades because, one, its prosthetic implementation was challenging, and two, because it was viewed from the wrong scientific model.

To read the rest of the article about the device, visit the Oxford Citizen.